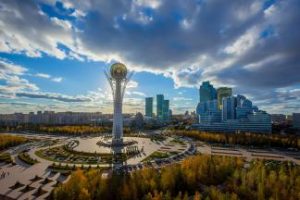 Al-Farabi KazNU – the University of Prosperity

Kazakhstan is a unique state, which is located in Europe, Siberia and Central Asia, in other words it is right in the heart of Eurasia. “Here you can feel the breath of ancient times (which is particularly felt in the Southern Kazakhstan) along with modernity. Kazakhstan is the country, where everything is mixed and this symbiosis makes it only more attractive“, says Erasmus + program student from Kazakhstan Omarova Zhansaya.

Capital in between beautiful mountains

The city of Almaty, which is also known as the southern capital of Kazakhstan, is located in the southeastern part of Kazakhstan and is the largest metropolis of the country. The city is surrounded by mountains of Trans-Ili Alatau, which is also partially protect from the wind, and the snow-covered slopes of the mountain peaks have modern ski resorts. Almaty is rich with with greenery, cultural and historical landmarks, fountains, picturesque parks and gardens. The magnificent view of the city opens from the top of the Kok-Tobe, where to reach it you need to conduct special lift. The mountain height is 1100 meters above sea level. Passing over the ‘old town’, which is placed directly under the cable car, you can appreciate the natural beauty of the green area of ​​Almaty.

„This area is also called Compote by the locals. It is curious that such name this area of ​​the city has earned because of the streets here that represent the names of different fruits”, tells Zhansaya.

One of the oldest and biggest university in the country

The largest university of the country is Kazakh National University (KazNU) named after Al-Farabi, which is located in Almaty. The graduates of this university are the authoritative politicians, famous diplomats, journalists and other professionals. KazNU owns a vast territory in the centre of the city with beautiful views of the mountains and the fresh air. On campus there are a huge library, numerous dining rooms and cafe for students and teachers, Palace of students after U. A. Dzholdasbekova, swimming pool, student service centre ‘Keremet’, the medical centre, the supermarket, cinema, and beauty salons.

In Kazakh National University after Al-Farabi are educating more than 20 thousand students including many of those, who because of international relations and the level of development of the university had the opportunity to visit different countries of the world by academic mobility?.

„I am one of those happy and grateful students of the university”, says Zhansaya Omarova.

“The level of education of university’s graduates is quite high, which proves that it has high qualification of the faculty of Physics and Technology Department, a high level of competitiveness of university’s students applying for various scholarships and research grants”, states Standardization and Certification study program’s master student from Kazakhstan.

Accordingly Zhansaya, Physics and Technology Faculty KazNU has always been and remains indispensable ‘forge’ highly qualified scientific graduates, who are the true wealth of the country and able to bring the prosperity of the country and guarantee a place of honor among the world leader countries with a high level of scientific and technological development.

Since the beginning of this academic year physics’ master students of Al–Farabi KazNU and Kaunas University of Technology (KTU) have a great opportunity to gain double diploma. Only in two years, Applied Physics master students can get both universities diploma.

“That is an exceptional possibility. Those students who would like to achieve double diploma, would have to spend three semesters at home university and one semester at partners. It’s a chance to get a high-level education and wide spectrum of skills as well as get to know interesting and unique country and culture”, says the student.

To visit Kazakhstan and study there is also possible via Erasmus+ program since KTU Faculty of Mathematics and Natural Sciences and Al–Farabi KazNU have an Erasmus+ agreement. Students going for Erasmus+ studies to Kazahkstan get 650 EUR grant monthly and  a travel grant.

After the quarantine KTU FMNS will welcome students in renewed spaces

After the quarantine KTU FMNS will welcome students in renewed spaces

2019-02-08
We are using cookies to provide statistics that help us give you the best experience of our site. You can find out more or switch them off if you prefer. However, by continuing to use the site without changing settings, you are agreeing to our use of cookies.
I agree