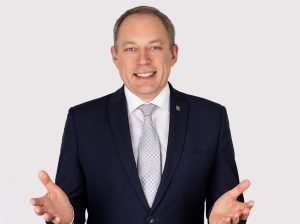 Kaunas University of Technology (KTU) Rector Professor Eugenijus Valatka was elected the President of Lithuanian University Rectors’ Conference. On Friday, December 20, during the General Meeting of the Conference, the new Presidium was also elected.

“I am grateful to the colleagues for trusting me with the responsibility to lead the Lithuanian Rectors’ Conference. I am committed to continuing to work in the direction started by my predecessors and to meet the challenges with the main aim in mind – working together in the name of the future of the universities and the whole higher education of Lithuania”, said Prof Valatka in the General Meeting of the Conference, which took place in Vilnius University.

During the Conference’s General Meeting, Vilnius Art Academy Rector Ieva Skauronė was appointed the Vice-President, Prof Kęstutis Kriščiūnas was confirmed in the position of Secretary-General and the Rector of Lithuanian Sports University Dr. Diana Rėklaitienė was re-elected as the fourth member of the Presidium for the second year.

Prof Eugenijus Valatka will stay in the post of the President of Lithuanian University Rectors’ Conference for one year; after the end of the first term, he can be re-elected for one more year.