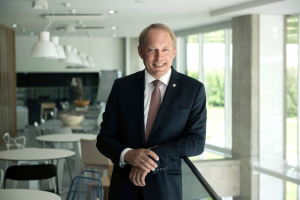 “This is a special day for me – I am starting the job as the rector of my Alma Mater. To have an opportunity to lead such an ambitious team as KTU community is not only great honour and pleasure, but also an immense responsibility. I accept it hoping for mutual trust and constructive cooperation”, said Professor Valatka.

The newly elected Rector assured that all the community will be included in decision-making concerning the essential issues of the University life: “I expect open discussions, exchanging arguments and ideas, in such a way creating the University’s today and tomorrow. Thank you all, and especially my Faculty team, for trust and support”.

In the meeting of the University Senate in the end of August the new Rector will talk about his plans, ideas and will introduce his closest team, the vice-rectors. Professor Valatka is intending to invite the University’s community into regular meetings where the important issues of the KTU life will be discussed.

The new KTU Rector was elected by KTU Council on 13 July 2018 by secret ballot. The Rector is being elected and appointed by the public international competition. The new leader signs a five-year contract with the University.